Lee Marsh and a Masonic mystery

A few years ago, Lee Marsh – an average, normal kind of Mason – noticed something a bit odd on a text he was reading from the Grand Lodge of England. The Heraldic Arms of the letterhead had a picture of the Arc of the Covenant (the ancient chest holding the original Ten Commandments) in the middle. Why would that be odd? Well, the rest of ordinary Masonry seems completely bare of the Arc; no references, no pictures and nothing in the ritual. Lee is well-read and well-informed, but he didn’t know. So why was the Arc in the middle of every letter heading from the most important Masonic organisation in England? 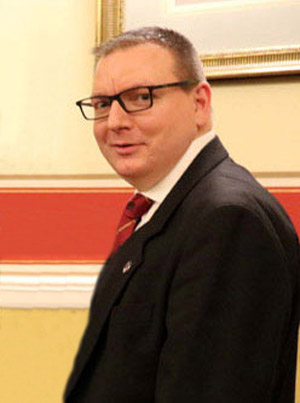 It got worse. He traced these coats of arms to the moment when two parts of Masonry (the Antients and the Moderns) amalgamated in 1813. But neither of them had an Arc in their coat of arms, yet the coat of arms they came up with (which is still used today) did have an Arc. Why? Was it from someone’s idea of a good idea? Or a joke? Masonry in 1813 was far from the liberal organisation it is today – ruled and regulated by royalty, and each of the two branches in 1813 having their own royal brother at its head. It wasn’t very likely that either of them would allow a new coat of arms with a flight of fancy in the middle.

Ever had an itch that you can’t scratch? That was how Lee felt about it. So, he set to work solving the puzzle. Two parts of English Masonry amalgamated in 1813. The two royals involved must have agreed the new coat of arms from this, but there is something placed in the middle that suddenly appears yet seemingly is never mentioned again. Lee needed to find out what the two halves of Freemasonry were like before they amalgamated. This is what he found: one of the two parts of English Masonry – the Antients – had a very strong link to Irish and Scottish Masonry. It was less formal and more traditional. The other – the Moderns – had let its traditions wander to become more exclusive and elaborate. For Masonry to survive, there wasn’t room for two lots of Masonry, and they needed to merge. Somewhere, some sense must have prevailed, and the Moderns started to change themselves back to earlier practices. There was one thing, however, that was just a problem – an additional part of Masonic ceremony – called the Royal Arch. One branch had it as part of their normal ceremonies, the other had it separate. After the amalgamation, the Moderns got their way on this, and the Royal Arch were (and still are) separate. Somewhere in here was the answer, but Lee still couldn’t see it. Still no Arc.

Was the answer in the ceremonies before amalgamation? In 1776, America gained its independence. It also became independent from English Masonry. Not to say that there wasn’t a link, but the Masonic influences on American Masonry were stronger from Ireland and Scotland than from England. Lee investigated, and found that American Royal Arch has the discovery of the Arc of the Covenant as a central part of its allegorical ceremony. This means that the original Antient ceremony (being closely linked to the Scottish and Irish traditions) must certainly have had the same mentions of the Arc. And the Royal Arch after the amalgamation would have had the same references. So where are they now?

Two brothers, each in charge of a part of English Masonry. One gives up his leadership of one part to his brother so there can be a join, but in the coat of arms they make and the ceremony they produce, there is compromise – the ceremony changes, but all of the major parts of the rival ceremony (including the Arc) are still there. There is a lodge set up to make both versions of the ceremony into one ceremony for both Antients and Moderns. But what about that extra part? The victory for the Antients is that now, everyone recognises it, including the Moderns. The victory for the Moderns is that the Royal Arch is now a separate part of the ceremony. The Arc at that time (as the pedestal is now), was the point of the whole Royal Arch ceremony. It would be the one item from that ceremony that someone in charge of it would insist is on any coat of arms of amalgamation.

Lee, the three principals and readers from the evening.

In 1820, the royal brother formerly in charge of the Antients dies. The leader of the Moderns now rules the whole of Freemasonry in England. It is possibly in a tribute to the death of his brother that the ritual is not immediately changed, but years pass and eventually, in 1834, the Arc of the Covenant becomes “something like a pedestal or altar of incense”, which it remains today. No Arc in the English ceremony. But imagine all of those documents already produced that have the coat of arms on them; all of the references in regalia and banners; all of the work needed to change everything, and do you backdate this, or have two separate lots of documents, etc? Far easier to leave the arms as they are and let the world forget about the original reference.

But wait a minute, we aren’t quite finished here. We have the means of eliminating the Arc from the ceremony, we have the opportunity for the Arc to be eliminated, but what is the motive? Why get rid of the Arc? Remember the connections of the Antients? Irish and Scottish Freemasonry still use the Arc. Why try to remove any connections to the Irish and Scots? Bear with me here – it goes back a long way.

It starts with the Templars – the Western, religious knights from the Crusades. One of the first things they did in the Holy Land was search Jerusalem for hidden religious treasures – like the Arc of the Covenant. Maybe they found it, maybe not; but they did find valuable religious treasures there that they kept (and someone still keeps) secret. In 1307, the Templars were persecuted by the French King, who tried to get them outlawed throughout the world. In Scotland, many Templars found refuge; there is evidence of strong links between them and early, Scottish Masonic organisations.

A few 100 years later and the Scots and Irish are supporters of the old, Catholic Stewart rulers in Britain – the Jacobite’s. England was mostly associated with the rival, Williamite and the Hanoverian rulers brought in by Parliament because they were Protestant. It was always going to end it tears. Rebellion and uprisings in Scotland and Ireland started in 1690 and were still happening in 1803. Masonry, despite efforts by English Freemasonry, was still strongly associated with the Jacobite’s because of the Scottish and Irish links.

The Arc, being so central to the ceremony and tradition of the Antients, would have had to have featured in any amalgamation coat of arms. But let’s not forget that both royal brothers who were leading the two halves of Freemasonry were also heirs to the Hanoverian, Protestant crown. As soon as possible, they were going to remove any trace of Scottish and Irish tradition, including the Arc, from the ceremony.

So finally, Lee had his answer. This was too good a story to leave on his shelves. Lee is a member of Old Masonians West Lancashire Chapter No 7702, in Warrington. Every year, all of the Royal Arch Masons in Warrington get together for a convocation, in which they tell a story about Masonry, its tradition or its origins. This year it was Old Masonians turn to tell a story and the Grand Superintendent Tony Harrison was the principal guest. Split into manageable parts for a number of readers, they told Lee’s story (in far more detail than can be give here) about why the Arc of the Covenant is on the Arms of the United Grand Lodge of England, and why you will see it nowhere else in English Masonry.