The installation meeting of the Warrington Lodge of Concord No 1250 held at the Warrington Masonic Hall was well attended by nearly 60 Freemasons, to see Robert Henry Beeton installed into the chair of King Solomon for the first time. The lodge was very honoured by the attendance of the principal guest John Patrick Murphy, Chairman of Garston Group. 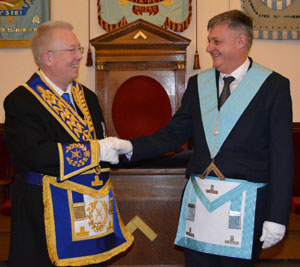 The lodge was opened by the WM Robert Wilson and the normal administration duties undertaken in the usual form. The lodge was opened in the second degree and Richard Sherratt, director of ceremonies retired to prepare for the entrance of John Patrick Murphy as principal guest and representative of the Provincial Grand Master Tony Harrison, along with Assistant Provincial Grand Master Barry Jameson, Gordon Amos, Chris Eyres and John Tyrer, the Warrington Group Vice Chairman.

The lodge was opened in the third degree and the dignitaries entered in due ceremonial style. Richard introduced Barry to the WM and he offered a very warm welcome to him along with the gavel, which was returned with confidence and anticipation of an enjoyable evening. Barry introduced John Murphy as the principal guest and Robert said he was honoured to receive him. John then occupied the principal’s seat next to the WM. 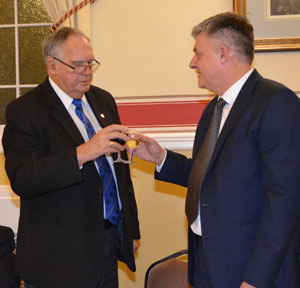 Wayne Robinson and Derek Arstall presented Robert Beeton to the WM to receive at his hand the benefit of installation. According to ancient custom Robert was installed into the chair of King Solomon. The ceremony was conducted in an exemplary manner with all due reverence, sincerity and humility. The working tools of an installed master were presented by John Williams. The third degree working tools were confidently explained by Patrick Hayden (a junior member), second degree by Wayne Robinson and the first degree by Robert Kelly, (also a junior member).

Immediately following the installation, John, on behalf the Provincial Grand Master Tony Harrison, congratulated Robert on being installed into the chair of such a friendly lodge, commenting that the ceremony was faultless and a pleasure to witness. He praised all the officers including Robert as installing master and Richard Sherratt as DC, for the smooth running of the ceremony and the members of the lodge for their work.

He also made special reference to the excellent delivery of the working tools by Patrick Hayden and Robert Kelly. He extended his good wishes to all present and hoped Robert and all his officers would have a productive year, wishing everyone the best of health to enjoy it to the full.

At this moment Robert conducted his first duty which was to present the charity donations to John. The donations were £300 to the Grand Charity (MCF), £100 to St Rocco’s Hospice, £100 to the Room at the Inn, £200 to The Masonic Hall, £200 to St Helen’s Music and £100 to the Warrington Talking Newspaper. These were in addition to donations made of £560 to lodge widows, £123 to the Provincial Group Secretary’s trio of events in January 2019 and £25 to the Masonic Fishing Charity. John received the donations saying how pleased he was to receive such a magnificent sum of money and praised all concerned saying it was such a remarkable amount and thanked the lodge and brethren on behalf of the recipients, stating that the donations would be gratefully received.

A grand social board followed which consisted of leek and potato soup, roast beef and Yorkshire pudding with seasonal vegetables, sticky toffee pudding and cheese and biscuits. Accompanied by table wine and followed by tea or coffee. Excellent food and service was provided by the hall catering staff.

The master’s song was sung by Gwilym Jones accompanied by Brian Wilson. Following the banquet, a raffle was held which raised £300. A thoroughly enjoyable evening was expressed by many members and visitors alike.

Before the dignitaries retired, both John Murphy and John Tyrer were presented with bouquets of flowers. Both Johns were delighted to receive them saying they were very pleased and thanked the members for their kindness.