Banquet with a difference

It all started with Paul Santus the WM of Boteler Lodge No 7367 saying he would like to do something different in his second consecutive year in the chair of a lodge that is noted for its dining prowess to exceed the norm. 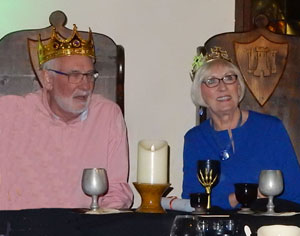 Along with his wife Millie and some of the members of the lodge it was decided to have a banquet, which is nothing unusual for the Boteler Lodge, but with the difference it would be a medieval banquet in a castle complete with an overnight stay. The timing was arranged to coincide about the time of Halloween and the place was a 13th century castle but not too far away from home. The venue chosen was Ruthin Castle which dates back to the 1200’s.

The castle was built about 1277 by Edward I and was built as a baronial castle which replaced the original wooden structure. It claims to have a most famous ghost of a ‘Grey Lady’ who was observed many times during the evening, (in fact she acted as host for the assembled ‘Lords and Ladies’ of the group).

All the staff of the castle and many of the visitors were dressed in period costume which added plenty of colour and atmosphere to the evening. 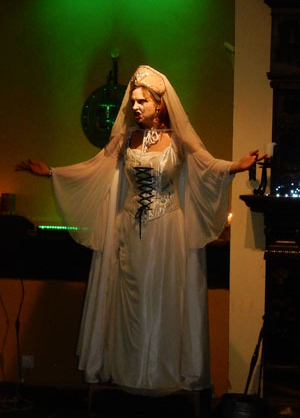 The Ghost ‘Grey Lady’ who was also the host for the evening.

The evening started with drinks in the room annexed to the banqueting hall and everyone was received according to their title and announced to the assembly.

Refectory tables and wooden bench seats were provided along with wooden spoons for the first course which was thick winter broth served with crusty bread and dumplings. The second course consisted of game pie served with green leaves and several tasty pickles. The main course followed which was self-carved chicken served whole at the table, a rack of ribs with roast potatoes and vegetables. Whilst eating the meal, mead, red and white wines were served in plenty. However, the final course was a little more modern having a chocolate base with berries which was very delicious, as was all the food.

Following on from the meal, dancing commenced with intervals of singing from the entertainers, which in the main were of the period and a little story-telling with some reflecting the spookiness of the building and Halloween.

The evening drew to a close at the bewitching hour of midnight, however, the party continued well into the small hours in the lounge.

Everyone enjoyed the change and the experience on offer, saying the food and the evening was very enjoyable. Most said it was not as messy as it could have been if true eating styles of the 13th century were totally adopted! So, Paul and Millie, people were saying: “Where to next?” “What about organising another?” “What would it be like organising a trip abroad?”

One of the important enjoyment factors was everyone still felt the same way in the morning after a good night’s sleep and fine breakfast. 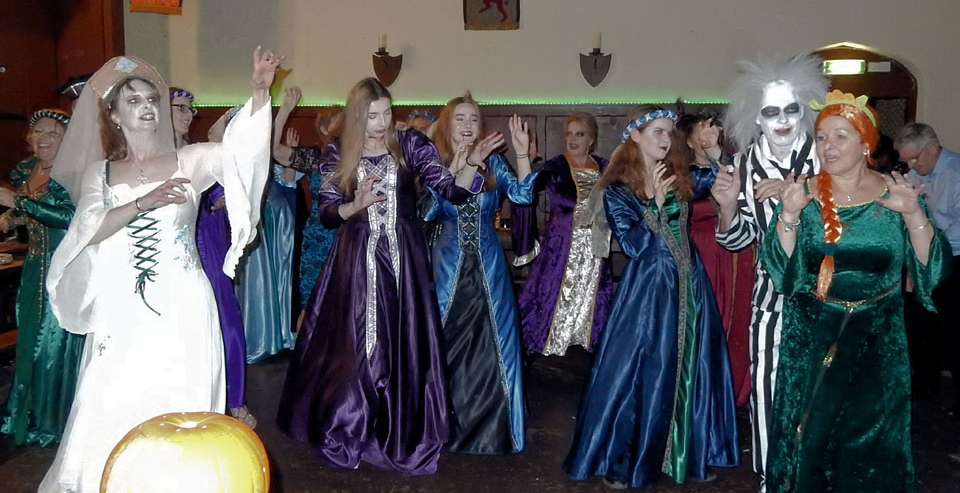