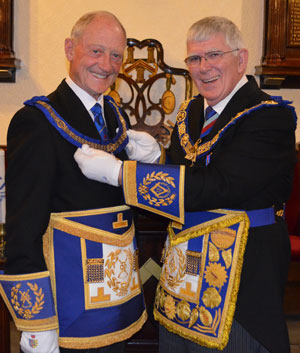 Tony (right) presenting Barry with his chain of office.

Although Barry’s responsibility will be the Eccles and South Eastern Groups, he requested that the ceremony be held at the meeting of Warrington Lodge of Concord No 1250, which is where he was initiated on 11 January 1977 and that the acting WM for the ceremony was John Williams, a lifelong friend throughout his Masonic career.

The PrGM Tony Harrison was welcomed into the lodge by John Williams who offered him the gavel which was accepted by Tony who then occupied the chair. Provincial Grand Lodge was then opened and Tony welcomed Barry into the lodge asking him to confirm if he was willing to accept the responsibility of APrGM, to which Barry confirmed.

Tony referred to Barry’s Masonic long career and the ranks that he had progressed through both in the Craft and the Royal Arch. (To read Barry’s CV click here) A certificate was read out by the Provincial Grand Secretary Peter Taylor confirming Barry’s promotion and Tony then placed Barry’s chain of appointment and congratulated him on his investment. Provincial Grand Lodge was then closed and Tony offered the gavel back to John Williams to complete the business of the lodge.

On conclusion of the meeting, the brethren retired to enjoy a happy and enjoyable festive board. A toast to the PrGM was given affectionately by Phillip Gunning to which Tony responded by saying he was close to tears and stuck for words.

Tony expressed his thanks to all the brethren who had attended in support of Barry, which demonstrated how popular he is and that he will be a worthy APrGM for the Eccles and South Eastern Groups.

John Williams then had a pleasant task to perform in presenting Tony with a gift from the lodge and also to Barry there was a pleasant surprise, that as a gift to celebrate his 75th birthday to which the brethren sang ‘Happy birthday’, making the evening a double celebration for Barry.

Barry said: “To be appointed an Assistant Provincial Grand Master with responsibility for the Eccles and South Eastern Groups is an unexpected and singular honour”. He valued the company and friendship he enjoyed with David Walmsley when he was a RA Assistant and hopes to continue the work David began, for the further development of these two groups.

Article and pictures by Tom Fredrickson.