Three members of Lodge of Charity No 2651, Alan Bristow, Vic Charlesworth and David Spear flew to Belfast from Liverpool to attend the 31st meeting of the ‘Lodges of Charity’, hosted by Charity Masonic Lodge No 688 at the Crowne Plaza Hotel in South Belfast. 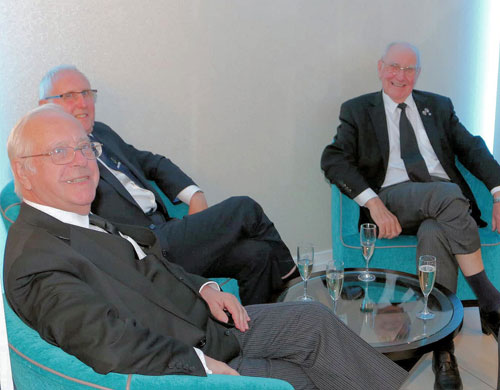 The trip did not start particularly well as they left Warrington at 5:30am and upon arrival at Liverpool Airport they found that due to a technical problem with the aeroplane, the flight to Belfast was delayed by two hours. They eventually arrived at their in hotel in Belfast at midday, checked in and adjourned to the bar for their lunch.

After meeting a number of friends from previous annual meetings, they changed into their regalia and went into the temporary lodge room where, after they were all proved in the first degree by the junior deacon and senior deacon, the lodge was opened in due form at 3:15pm by the acting WM, Hugh Selby. He asked the brethren present to be upstanding and he gave greetings to the DepPrGM of Antrim and to the PPrAGM of Yorkshire West Riding and this was followed by salutations. There was a report and the PrGM of Down, John Clarke was admitted, greeted by Hugh Selby and offered the gavel which he accepted. After the summons of the lodge had been read by the lodge secretary, Hugh resumed the chair from where he asked the brethren from Lodges of Charity in Warrington, Bradford, Kidderminster, Shrewsbury and Birmingham to be upstanding in turn and greetings were given to each lodge separately.

John Clarke announced that David Selby Past Assistant Provincial Grand Master of Down was to be appointed as the Standard Bearer in the Grand Lodge of Ireland in September and this announcement was greeted with acclaim by all present. This is a three-year progressive appointment for David and was reward for his outstanding service to Freemasonry in Northern Ireland.

After the rest of the lodge business had been conducted, the lodge was closed in due form and the brethren departed whilst the room was cleared of Masonic furniture and set out in theatre style in readiness for the next part of the programme. The brethren of the lodge and the visiting brethren, the ladies of the lodge members and some visitors took their places in the room and Mrs Carol Walker MBE, the Chair of the Somme Museum in Belfast was introduced by David Selby. She treated everyone to an excellent presentation entitled ‘Freemasonry in the trenches in World War 1’ for which she was applauded and thanked on behalf of all present by David Selby. 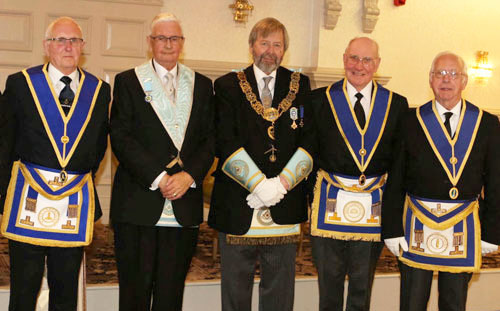 Everybody retired to the bar whilst the room was again reset, this time for the festive board which followed a champagne reception. The menu was leek and potato soup accompanied by lardons of crispy pancetta, pan fried chicken with chorizo and tomato farcie and basil and leek cream and vegetables, followed by a duo of milk and white chocolate cheesecake. Will George responded to the toast to the visitors and informed everyone that the annual meeting would be held in Birmingham on 30 May 2020.
.
After a good night’s sleep, the Warrington contingent enjoyed an excellent breakfast, said goodbye to their many friends and went into Belfast where they embarked on the bus tour. They went to West Belfast and walked along the Falls Road, Shanklin Road and Crumlin Road, locally referred to as ‘the Murder Mile’, where the murals and the peace walls are still evident. They thought it was quite eerie to see in the same street both the Irish flag and the Union Jack flying and to see memorials to those who died from both sides of the conflict during the troubles within metres of each other. Just outside the Crumlin Road Jail there is a Masonic hall and this is directly opposite the Court Room which was devastated during the troubles. Stormont is a wonderful building set on a hill in its own grounds just outside and overlooking the city. The city centre is a vibrant place now, full of cafes, bars and hotels. Before the Good Friday Agreement in 1998, according to their guide, there were only two decent hotels in the city centre whereas now there are over 40 and three more to be opened during the next 12 months, including one named after George Best.

The Warrington members said it was a very enjoyable visit and are looking forward to the next meeting in Birmingham in May 2020. Warrington Lodge of Charity No 2651 will be the hosts in March/April 2022 when the lodge will be celebrating 125 years since it received its charter on 27 March 1897.