A most enjoyable day!

Haydock Park Golf Club again hosted the annual event of the Warrington Group Masonic Golf Society. The 18-hole, 6058 yards course is an attractive well established, mainly flat, parkland course designed by James Braid, with most fairways being lined by well-established mature trees. Greenside sand traps and fairway undulations present difficulties to both high and low handicappers alike. Haydock Park is an ideal venue and has hosted the group’s golf day several times in the past. The course always seems to be maintained in fabulous condition, both fairways and greens were immaculate.

Three of the teams before teeing off.

The weather forecast indicated sunshine and showers with the possibility of some local thunder!  Dave Goddard (event organiser), was in attendance to welcome all players and in particular to offer a very warm welcome to new players. Following an appetising lunch of soup and sandwiches, the first group consisting of Dave Goddard, Barry Jameson, David Durling and Patrick Walsh teed off at 1:10pm. They were followed by five four ball teams and one three ball bringing up the rear.

This year ladies and gents’ teams were mixed and two competitions were run consecutively. The main Masonic prize for the gents (of any age) being the R W Collins Trophy. The Ron Hankin Trophy is for Masonic golfers of 60 years of age and over. Both of these trophies are mutually exclusive.  There is also a gent’s non-Masonic prize, being the Visitors Shield and the ladies competed for the Phil Gartside Memorial Trophy. The usual ‘skills trophies’ were played for, which included nearest the pin on hole number four, longest drive on hole number 10, nearest the pin in two shots on hole number seven and a perseverance trophy.

Four of the teams before teeing off.

Many players commented that the course was a pleasure to play, even though intermittent rain showers, one very heavy with thunder did, to some extent, hinder play.  An excellent three course meal followed which was served in the pleasant surroundings of the club house restaurant and enjoyed by all. Many complementary remarks were made with respect to the whole day, the weather was changeable, the course remained in exceptional condition, the food was first class and the company excellent – most enjoyable!

Dave introduced Andy Barton, Warrington Group Chairman, who presented the winners with their prizes, which were:  Ian White for the R W Collins Trophy, Alex Roberts for the Ron Hankin Trophy, Ian Stanley  for  being nearest the pin on the fourth hole, Ian White for the longest drive on the 10th hole,  David Finlay for being nearest the pin in two on the seventh hole, Sue Mazurkiewicz for the ladies Phil Gartside Memorial Trophy (presented by Carol Gartside), Ian Holden for the Visitors Shield, Chris Eyres’ team for the Rainbow Trophy and Sue Burke for the Perseverance Prize.

Andy thanked Dave Goddard for organising the event, the course staff for their help in providing the event with great facilities and a beautiful course, the catering staff for the excellent food, the event sponsors particularly Barry Jameson and Dave Goddard for their generous and kind support of the event, the members and everyone for supporting the day. He concluded by giving special thanks to the ladies for their continued support.

Dave announced that the day had raised £160 for charity and said he had booked the event for the 4 June 2020. Once again, he thanked all for their kind support and was looking forward to welcoming everyone next year. 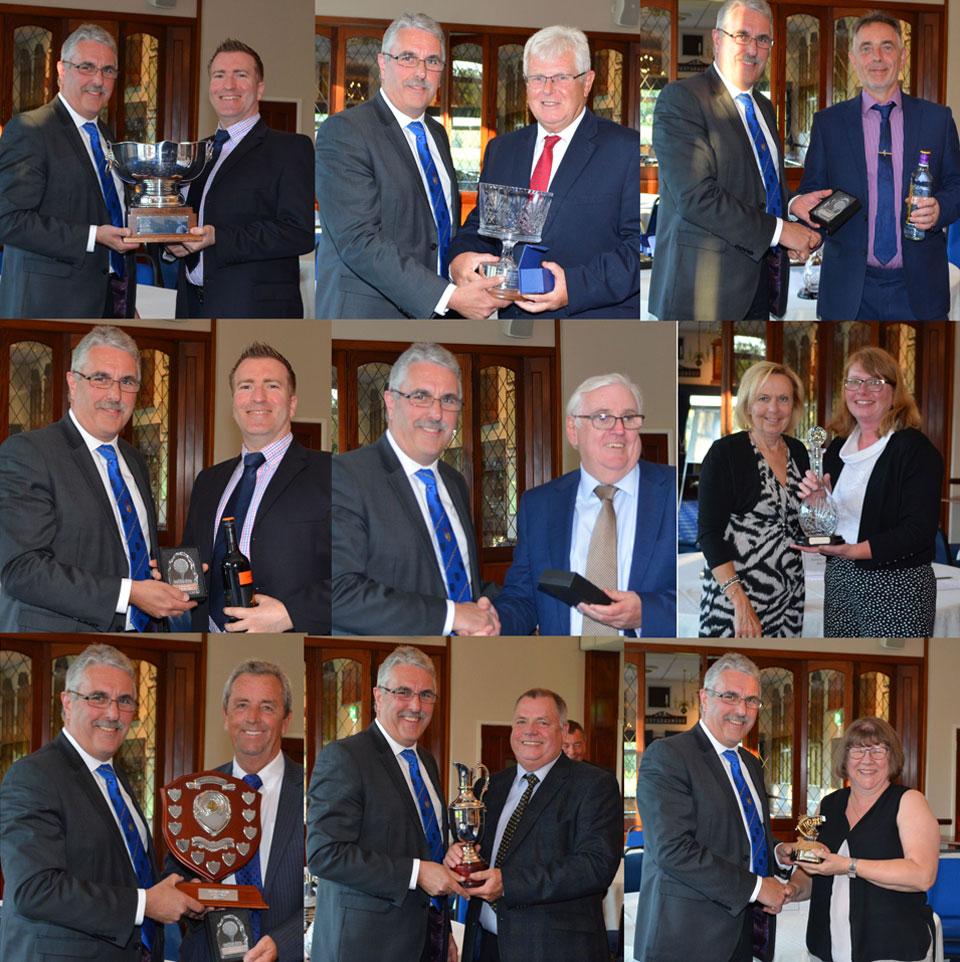