Birchwood Lodge No 8861 hosted more than 75 members and guests to support and witness the auspicious occasion of Norman Pritchard’s ninth time being installed into the chair of King Solomon, in several lodges. 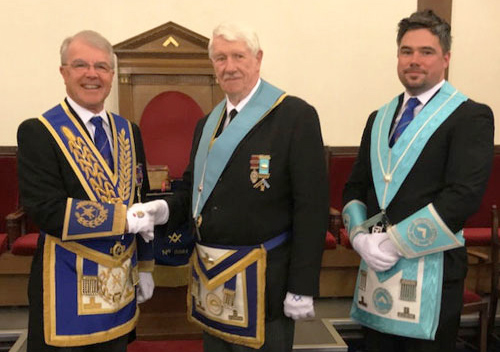 Pictured from left to right, are: David Durling, Norman Pritchard and Mathew Crawley.

The lodge was opened by installing master Mathew Crawley. The lodge was then opened in the second and third degrees.

All grand and Provincial grand officers were admitted in due ceremonial style. Mathew welcomed all present, noting that it was an honour and a privilege to see so many distinguished brethren present on this special occasion, for the lodge and for Norman. He also wished everyone a pleasant evening in enjoyable company.

David Durling thanked Mathew and the brethren of the lodge for their warm welcome, saying how much he and his colleagues were looking forward to the installation ceremony and the evening with the assembled brethren. David continued by saying that he brought with him the sincere best wishes of the Provincial Grand Master Tony Harrison.

Mathew asked Jim Cartledge to assist him by taking the chair of the senior warden. Mike Hamilton was in the junior warden’s chair and Alan Gillard took his place as inner guard. David Hobbs, as director of ceremonies, conducted proceedings with an exemplary demonstration of ritual. 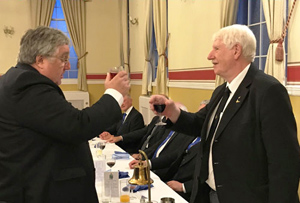 Norman, as master elect, was presented by John Thompson of Willows Lodge No 5343, to receive at Mathew’s hand the benefit of installation. Norman was then installed according to ancient custom into the chair of King Solomon. The ceremony was conducted with all due humility, sincerity and reverence.

The address to the new WM was delivered with due dignity and in a professional manner by Peter Walker. The addresses to the wardens and then to the brethren of the lodge were similarly delivered by Dennis Rudd and David Durling respectively.

The installation ceremony completed, David Durling, on behalf of the Provincial Grand Master Tony Harrison, congratulated Norman on being installed into the chair in such an active, thriving and friendly lodge. He also commented on the excellent ceremony he had witnessed and thanked the lodge members for all their hard work in preparing for the ceremony and in particular the work of David Hobbs as director of ceremonies and the younger members in their presentation of the working tools. In addition, he added that he extended his good wishes to all present and hoped Norman and all his officers would have a productive and healthy year ahead. 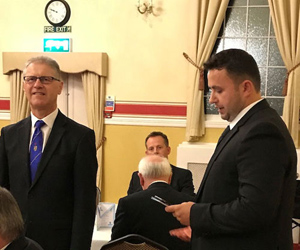 David Hobbs DC (left), supporting Blerim Suti during his toast to the founders of the lodge.

Norman then conducted his first duty as WM by presenting cheques to David for charitable causes, namely Ecclesholme £300, The Adam Lewis Effect £300, Cavell Nurses Trust £300, Dogs Trust £531, MCF Festival £569, Warrington Masonic Hall Company £250, making a grand total of £2,250. David thanked the lodge and its members, on behalf of the recipients, for their generosity in donating such a magnificent amount of money to the charities concerned.

An excellent festive board was provided by the hall staff, which was heartily enjoyed by all. A raffle following the festive board raised a substantial £264 for the lodge charity funds.

The master’s song was performed by Peter Whalley, accompanied by Keith Dickinson, and was well received. Principal guests were presented with bouquets for their partners and they thanked the lodge for their generosity and a memorable evening.

Story and pictures by Dave Eccles.