The WM and brethren of Shalom Lodge No 7541 hosted Lodge Glittering Star No 322 (Irish Constitution) to Southport Masonic Hall, where they exercised their travelling warrant to open their lodge and perform a first degree ceremony according to ancient Irish ritual. 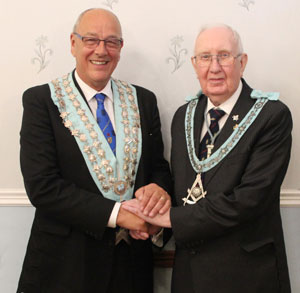 Ed Mawdsley WM of Shalom Lodge opened the lodge with the assistance of his officers. Ed then welcomed over 40 visiting brethren from 28 lodges to the meeting, saying how pleased he was to see so many visiting brethren in the temple. Ed completed the lodge business, which included his election as master for a second year, after the risings he closed the lodge.

The director of ceremonies of Lodge Glittering Star asked the brethren to stand to welcome the WM Ray Sheppard accompanied by his officers and grand officers from both the Irish and English Constitutions. The lodge was tyled and the lodge deacons then proceeded to prove every person present before the lodge was opened and the lodge’s unique first degree ceremony started.

The two WMs are pictured with members of their lodges.

The Irish ritual is different in many ways from that seen in West Lancashire (although there are some similarities) some examples of the differences are: the volume of the sacred law, the lodge working tools, ashlars and lights are displayed on a table in the middle of the mosaic pavement,  another is that the salutations are given to the visiting brethren twice, once when the lodge is opened and again when it is closed, another is the brandishing of bayonets in the ceremony!

The furniture of Lodge Glittering Star.

Robert Beaver the junior deacon of Shalom Lodge acted as the candidate retired from the lodge in order to be prepared for the ceremony. Ray completed as much of the lodge business as possible the ceremony of initiation started with three knocks on the door. 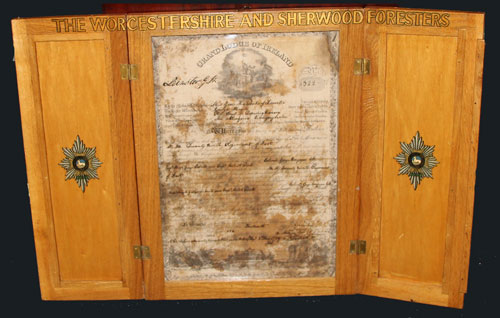 The DC and deacons entered the temple with the candidate and the first degree ceremony was carried out  with most of the members of  Lodge Glittering Star taking part, in what was a very different way to the ceremonies the visiting brethren had ever seen before –  in what was later said to epitomise the ancient Irish ritual and was delivered without any practice meetings as the lodge members live in all parts of the UK and Europe and only come together at their meetings.

After the ceremony of initiation Ray completed the rest of the lodge business and the lodge was closed in due form with salutations to the visiting brethren being given.

Over 70 brethren retired to the bar before enjoying the festive board. In his response on behalf of the visitors Ray gave a brief history of Lodge Glittering Star which was warranted in 1759 in HM 29th Foot Regiment (Worcestershire’s and Sherwood Foresters) and is one of two Irish military lodges still in existence today, They are also one of the last two remaining travelling lodges, the other is St Patrick’s Lodge No 295 which is the last truly regimental lodge of the Royal Dragoons (formerly the 4th/7th Dragoon Guards), who during their recent operational tour in Iraq, they held three meetings in Basra. Ray concluded by saying that the lodge had received over 24,000 visitors to the meetings in the last 30 years.

If you would like to see a ceremony by Lodge Glittering Star they are meeting with Childwall Lodge No 5235 which meets in Hope Street, Liverpool on Thursday 24 October 2019. To book your place email the lodge secretary, David Cross at davidcross27@icloud.com

The brethren enjoying the festive board.