A great day for Robert

Well over 90 brethren came to witness Robert (Rob) Roberts being installed into the WM’s chair of Lodge of Charity No 2651, at Warrington Masonic Hall. The lodge was honoured by the presence of the Provincial Grand Master Tony Harrison and Assistant Provincial Grand Master Kevin Poynton. Stuart Ainsworth installing master opened the lodge and conducted the usual administrative duties. 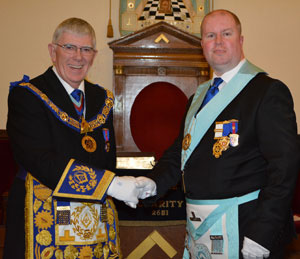 Stuart extended a very warm welcome to Tony and all the Provincial team including all the dignitaries and visitors. As a mark of respect, Stuart offered Tony the gavel, saying it gave him great pleasure to offer the gavel, perhaps half expecting him to return it. Tony thanked Stuart and quickly returned the gavel expressing his delight in handing it back, exclaiming he hoped to enjoy the evening!

Stuart addressed the members of the lodge and thanked them for the support they had provided to him and the lodge in general over the past 12 months, saying he had enjoyed the year and hoped that the members would continue their support for Rob.

Stuart then requested John Karran to occupy the SW’s chair, Barry Dickinson the JW’s chair and Charles Carr to act as IG. All were delighted to assist by occupying their respective offices. Stuart also asked Derek Bird to occupy the master’s chair for the next part of the ceremony. Derek assented to his request saying it would give him great pleasure to do so.

Rob was presented for the chair of King Solomon by Alan Bristow and David Spear. The ceremony proceeded according to ancient custom and Ro accepted his role with dignity. Rob was then installed into the chair for the first time.

Immediately following the installation, Tony Harrison congratulated Rob on being installed into the chair of such a distinguished lodge, commenting that the ceremony was a pleasure to witness. He congratulated the two installing masters and the DC. He personally congratulated and thanked the three brethren who delivered the working tools. He continued by extending his good wishes to all present and hoped Rob and all his officers would have a productive and an enjoyable year and he wished everyone the best of health. 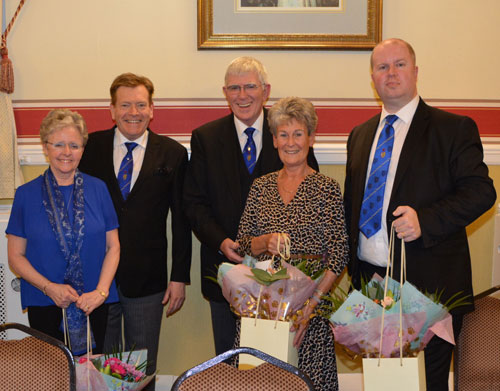 Pictured from left to right, are: Susan Poynton, Kevin Poynton, Tony Harrison, Maureen Harrison with their flowers presented by Rob.

The first task Robert had to perform as the new WM was a very pleasant one of presenting donations to Tony: £700 to the MCF 2021 Festival making the lodge a Patron, £500 to Eccleshome and £800 to CANtreat to help the organisation to complete its final project at the Halton Hospital. This was in memory of the late Phil Gartside. £500 to the Walton Lea Project and £151 to the Warrington Museum of Freemasonry. This provides a total of £2,651 donated on the day, which matched the lodge number. An additional amount from the social account of £400 was donated to the Warrington Masonic Hall. This is also in addition to £400 to widows and brethren of the lodge and £200 to other charities. (Totalling over £3,600).

Tony thanked Rob and all the brethren, remarking that the total amounted was an incredible sum and he was very pleased to accept the donations on behalf of the recipients.

An excellent festive board followed with a five-course banquet served with red or white wine with tea or coffee to finish.  Shortly after the meal a raffle was conducted, which raised a magnificent sum of £670.

Kevin proposed a toast to the health of Tony and he responded by thanking the Provincial team for their support and the brethren of the lodge for their work. He congratulated the junior brethren on their delivery of the respective working tools and Kevin for his toast and everyone for making him so welcome to the Warrington Group. He commented on the enjoyable evening he had had. He also commented that membership numbers were on the increase in the Province, finally he wished everyone should have a good year.

The master’s song was sung by Peter Whalley who was accompanied by Stephen Derringer.

At the close of the evening Rob presented Tony and his wife Maureen, along with Kevin and his wife Susan and Chris Gleave bouquets of flowers. Kevin on behalf of Maureen and Susan thanked the brethren saying they were delighted to receive such lovely flowers Chris also thanked the members on behalf of his wife Hanna.

This most enjoyable and memorable evening was brought to a close by Paul Rigby proposing the tyler’s toast.