Members of Gilbert Greenall Chapter No 1250, with companions from across the Province, assembled at Warrington Masonic Hall for the installation meeting. The first principal Ian White, with second principal Chris Todd and third principal Barry Corcoran opened the chapter in excellent style. 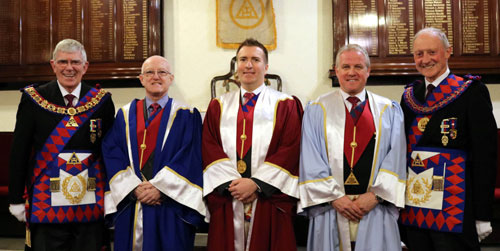 The three principals greeted their guests and all present warmly, and this was returned in kind by Tony. The ceremony was presented very professionally by the officers; memorised and smoothly performed. 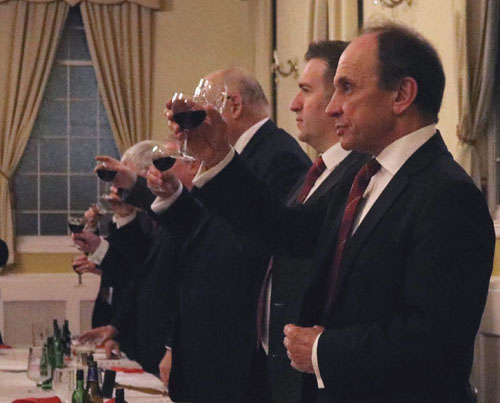 Robe addresses were given to the first principal by Ian White, to the second principal by Chris Todd, to the third principal by Barry Corcoran. Chris then invested his officers for the ensuing year. Further addresses were made to the principals by Jim Walker, to scribe Nehemiah by John McIntyre, to the principal sojourner by Rob Roberts, to the assistant sojourners by Malcolm McIntosh, to the stewards by Keith Young, to the janitor by David Rogers, to the companions by Chris Gleave and to the chapter by Tony Harrison.

Chris Todd then presented Tony with cheques from the charity account for the amounts of £615 to the MCF 2021 Festival, £200 to the College of Optometrists and £100 to Peter Taylor for his tripartite charity event. From the Benevolent Account, £200 was given to Warrington Masonic Hall. To which Tony celebrated the generosity of the chapter.

As further business, the amount given to the MCF 2021 Festival made Gilbert Greenall Chapter a Patron of the Festival. Tony took great delight in presenting this certificate to the three principals. 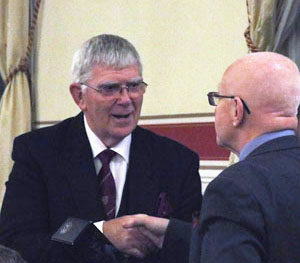 Chris (right) presents Tony with a bottle and good wishes.

The ceremony was followed by a unique social board of fan of melon, deep fried whitebait, thyme and mustard bacon chop with crème brulé. A stunning £363 was raised at the raffle.

A number of excellent speeches were made, during which special mention was made of Chris Gleave for his excellent work as DC in the night’s ceremony and the chapter companions as a whole for their work. There was a little gentle teasing of the members of Gilbert Greenall Chapter about the detail of their ceremony and how it differs from most others. All given and taken in good part.

Tony made a particular point of thanking the large number of high ranking and acting Provincial grand officers who had supported him on the evening. Final thoughts were that it is incumbent on companions to extoll the virtues of Royal Arch Chapter to those members of the Caft not already exalted.

The whole evening, from the start of the ceremony to the end of the festive board, was conducted in the best traditions of companionship and fraternity.

The three principals with some of their guests.