John up in Lights

Lodge of Lights No 148 welcomed over 90 brethren from across the Province as one of its stalwarts, John Starkey, once more attained the chair of King Solomon for the 5th time. As one would expect from an illustrious lodge, business was conducted well and principal guest for the evening Andrew Whittle (Chairman of Woolton Group) was admitted with due ceremony. 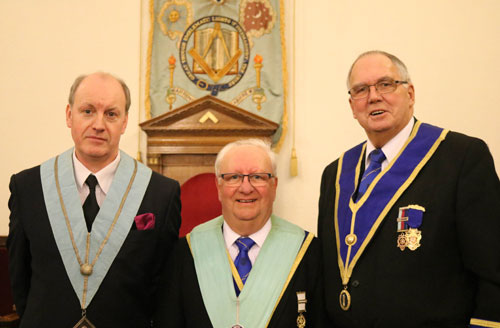 Pictured from left to right, are: David Harrison, John Starkey and Gwilym Jones.

The installation part of the ceremony being over, Andrew offered the good wishes of Tony Harrison, congratulating John on being installed again and congratulating Gwilym as installing master, David Harrison as IPM and Eric Delamere as DC. 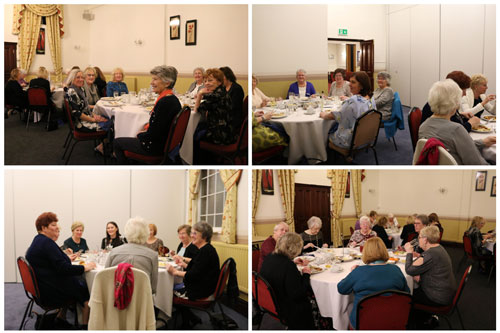 The ladies of the lodge at their meal.

Music in the lodge was ably produced by Keith Dickinson, who afterwards accompanied Gwilym’s dulcet tones for ‘the master’s song’.

After an excellent meal at the festive board, shared by 88 of the brethren, Andrew made a point of celebrating the quality of the work performed in lodge, the outgoing DC, the installing master and the junior brethren presenting working tools. He was very impressed by the charitable giving of the lodge and emphasised the importance of that giving by highlighting, as example, the work of the two ‘blood bikes’ given by the Province to the NHS. Finally, Andrew remarked on the age of this lodge, with its own traditions and the huge tracing boards that are unique in this lodge.

36 ladies of lodge members and guests dined separately, joining their partners at the end of the festive board. Among these was Jean, John’s wife of 51 years – which is a remarkable feat of devotion and longevity. The evening ended with a presentation of bouquets of flowers for the principal guests.