My best ever day in Masonry

So, said Graham Greenall, newly installed master of Academy Lodge No 9382 on the day of his attaining the chair of King Solomon. Perhaps it is not surprising with such a fine selection of officers and brethren present. 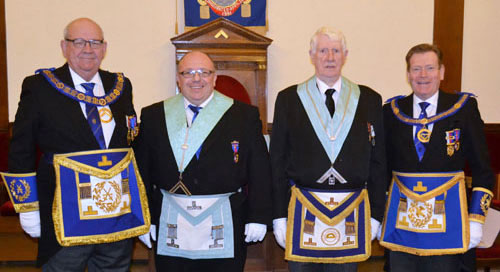 Pictured from left to right, are: Philip Gunning, Graham Greenall, Norman Pritchard and Kevin Poynton before the ceremony.

Addresses were given to the new WM by Norman, to the wardens by Colin Boardman and to the brethren of the lodge by Philip Gunning.

Norman presented Philip with an envelope for charitable donations for the sum of; £300 to the MCF 2021 Festival, £300 to Ecclesholme, two cheques for £200 to Warrington Masonic Hall, £100 to the Warrington Masonic Museum and £200 to Newton Community Hospital making a grand total of £1,300. Philip thanked the brethren of the lodge on behalf of the recipients for their generosity. 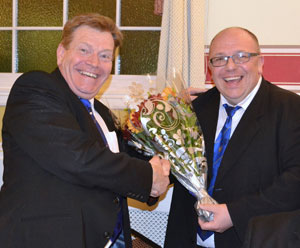 After the excellent meal, Philip made a point of celebrating the quality of the work performed by Norman, the acting wardens and the inner guard, all part of the installing team of past masters, and accordingly congratulated the team for their excellent work.

The raffle during the evening raised a very creditable £227. At the end of the night, Academy Lodge routinely celebrates their Founders in a toast.

As usual for Academy Lodge, the ladies of lodge members, (12 on the night), dined and were entertained separately, joining their partners at the end of the festive board. A thoroughly civilised idea.

The evening ended with a presentation of bouquets of flowers for the principal guests and a bottle of scotch for the Provincial Deputy Grand Director of Ceremonies Barry Fitzgerald. The tyler’s toast brought the day’s events to an end. It was at this point that the new WM gave the quote: “My best ever day in masonry.”