The fourth time for Darren

The installation meeting of the Travellers’ Lodge No 4679 was held at the Warrington Masonic Hall. It was attended by 37 Masons to see Darren John Brown installed in the chair of King Solomon, by his predecessor Barry Corcoran, the installing master. On this occasion the lodge was honoured by the presence of the Deputy Provincial Grand Master Philip Gunning and Assistant Provincial Grand Master Kevin Poynton. 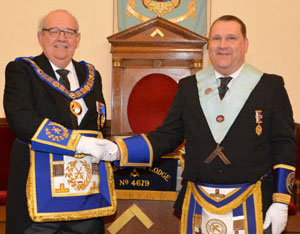 Barry offered a warm welcome to all present saying he was delighted to receive such distinguished guests and hoped they would have an enjoyable evening.

Barry then offered Philip the gavel, which he accepted and quickly returned. Barry requested Michael Hamilton to act as installing SW, Charles Carr as installing JW and Norman Pritchard as installing IG. All the brethren accepted saying they were honoured and pleased to accept. 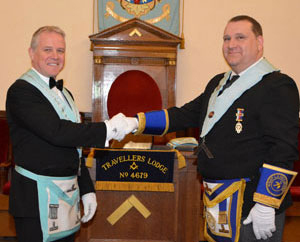 Barry addressed the members of Travellers’ Lodge and thanked them all for their help and support over the last two years of his mastership saying that he had had a wonderful time. He continued by asking the lodge to maintain their support for Darren in his year in office.

Darren was presented for installation by Michael Hamilton and William Wainwright and was then installed by Barry according to ancient custom, which he did with great fortitude and sincerity.

Darren invested Barry as IPM thanking him for the work he had conducted over the last two years and saying he felt sure if he needed help, he would be relying on him for support. 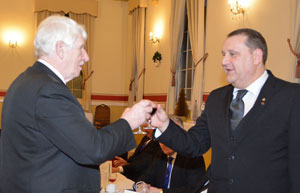 Immediately following the installation, Philip conveyed the best wishes of the Provincial Grand Master Tony Harrison. He congratulated Darren on being installed into the chair of such a fine lodge, commenting that the ceremony was a pleasure to witness. He congratulated Barry as installing master on the excellent ceremony and thanked him for his hard work. Philip extended his good wishes to all present and hoped Darren and all his officers would have a productive year and wished everyone the best of health to enjoy it to the full. 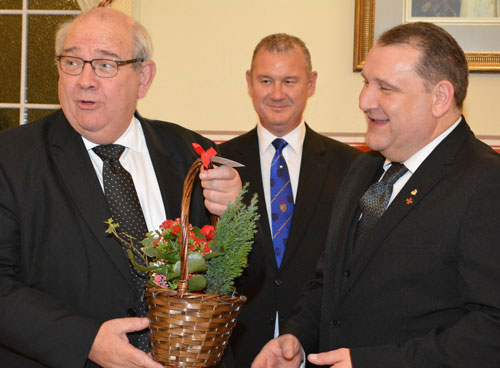 Philip (left) being presented with a flower basket by Darren (right) with Ian (centre) looking on.

At the festive board John McConnell said grace and an excellent banquet followed which consisted of black pudding with a poached egg, creamy pork and pear cassoulet with seasonal vegetables, profiteroles with chocolate sauce and a cheese board with biscuits. Red or white table wine was served throughout the meal with tea or coffee to finish. John returned thanks.

The master’s song was sung by Norman Pritchard who was accompanied by Keith Jackson. Following the meal, a raffle was held which generated over £150.

Darren presented Philip with a flower basket thanking him for his attendance. Philip thanked the brethren saying he was delighted to receive such a gift and felt sure his wife would be similarly pleased.

The most enjoyable evening was brought to an end by Bill Wainwright who proposed the tyler’s toast.