The installation meeting of Old Masonians West Lancashire Chapter No 7702, to install Eric Miller into the first principal’s chair, was attended by almost 30 members and guests. 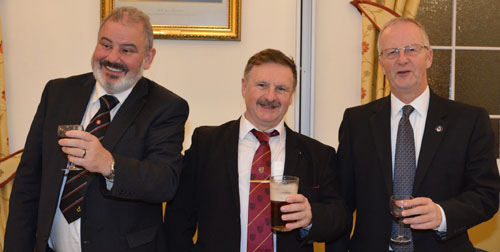 Pictured from left to right, are: Steve Wallace, Eric Miller and Michael Williams.

The chapter was opened in the traditional style by Malcolm Alexander, the installing first principal and the usual administration was undertaken. Malcolm announced that Samuel Boardman had passed to the grand Chapter above in the summer recess and requested all companions to stand in silence as a mark of respect to departed merit.

Malcolm welcomed Colin and all of the grand and Provincial grand officers present, saying he was delighted and honoured to receive the distinguished guests and hoped they all would have a most enjoyable evening.

Passages from scripture were read by Andrew Wilson and Raffaele Alboreto. Michael Williams was reinstalled as third principal by proclamation. Steve Wallace was installed as second principal and Eric Miller was then installed as first principal of the chapter.

Following a sincere ceremony, Colin on behalf of the Grand Superintendent Tony Harrison, congratulated the three principals on being installed in the chairs of the chapter and wished them good health and happiness for an enjoyable year in office. He went on to congratulate Malcolm as installing first principal and Darren Brown as director of ceremonies. 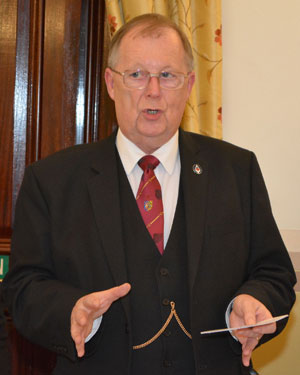 Colin Rowling responding to the toast to grand officers.

Eric presented Colin with several cheques for a total of £1,100, which included donations to the Masonic Charitable Foundation 2021 Festival of £750, Masonic Trust for Girls and Boys £100, Warrington Masonic Hall £100 and Room at the Inn £150.

Colin thanked Eric for the most generous donations, saying it was a credit to all the members who had generated such a magnificent amount for charity including the donation to the Masonic Charitable Foundation 2021 Festival. Colin continued by saying, this should put the chapter into the Grand Patron status and is very commendable. He stated it would give him great pleasure in forwarding the donations to the beneficiaries and thanked everyone on their behalf.

Following the ceremony everyone enjoyed an excellent three course meal at the festive board provided by the Masonic hall catering staff. The meal consisted of cream of mushroom soup, roast beef with roast potatoes and vegetables, cheesecake with tea of coffee. Following on from the meal a raffle was held which generated over £70 for charity. The enjoyable evening was brought to a close by the janitor’s toast.