A very pleasant surprise for Robert

Well over 70 brethren came to witness Robert Wilson being installed into the Warrington Lodge of Concord No 1250, at the Warrington Masonic Hall. John McIntyre group secretary and installing master, opened the lodge and conducted the usual administrative duties. He then expressed his personal thanks to the brethren of the lodge for work done during the two years and the support they had provided. 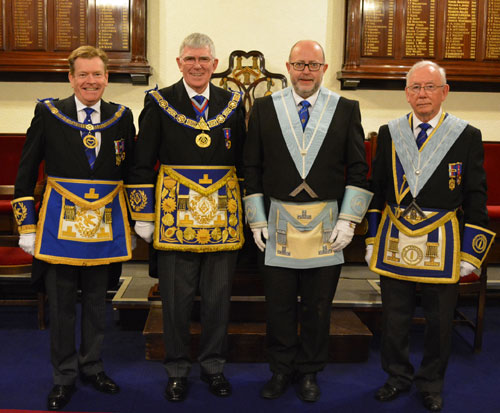 John extended a very warm welcome to Tony and all the Provincial team including all the dignitaries and visitors. As a mark of respect John offered Tony the gavel, saying it gave him great pleasure to offer the gavel, perhaps half expecting him to return it. Tony thanked John and quickly returned the gavel expressing his delight in handing it back, exclaiming he hoped to enjoy the evening!

John then requested John Karran to occupy the senior wardens chair, Clive Dickinson to act as junior warden and Charles Carr to continue to act as inner guard. All were delighted to assist by occupying their respective offices.

Robert was presented for the chair of King Solomon by Derek Arstall and James Walker. The ceremony proceeded according to ancient custom and Robert accepted his role with dignity. 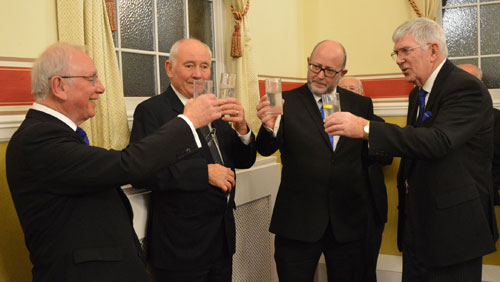 This was the first time that Robert had been proposed for the chair of King Solomon. Immediately before the board of installed masters was opened, John made what appeared, at first, to be strange intervention, which came as a complete surprise to Robert and the rest of the assembly. The request John made was for Robert’s father Brian Wilson, (a visitor), to actually install his son. It appeared afterwards that several practices had taken place without the knowledge of almost everyone present. Obviously both father and son were highly delighted which resulted in not only a very sincere ceremony, but also a very emotionally charged one too!

The working tools of an installed master were given by John Williams during the ceremony, to the delight of the assembled brethren.

The ceremony proceeded with the working tools of the third degree being explained by Nicholas Wood, the second degree by Robert Kelly and the first degree by Patrick Hayden, who is a very junior brother, (an entered apprentice).

Immediately following the installation, Tony, congratulated Robert on his being installed into the chair of such a distinguished lodge, commenting that the ceremony was a pleasure to witness and very special by being installed by Robert’s ‘father-brother’! He congratulated the two installing masters, the DC and the brethren who delivered the working tools. Tony extended his good wishes to all present and hoped Robert and all his officers would have a productive, enjoyable year, with everyone having the best of health.

Tony thanked Robert and all the brethren, remarking that the total amounted to an incredible sum and he was very pleased to accept the donations on behalf of the recipients. 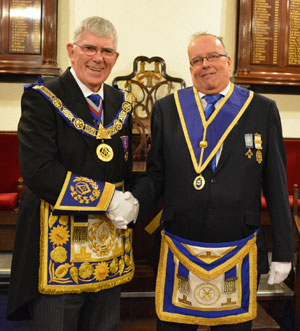 Before the banquet started Tony was introduced to Quentin Newhall, who at a recent meeting of his lodge (the Lodge of Charity No 2651), was honoured at the Province and invested with his recently awarded rank of Past Provincial Assistant Grand Sword Bearer, by Kevin Poynton. Tony took this opportunity to personally congratulate Quentin and thanked him for his service.

An excellent festive board followed with a five-course banquet served with red or white wine with tea or coffee to finish.  Shortly after the meal, a raffle was conducted which raised a magnificent sum of £345.

Kevin proposed a toast to the health of Tony and he responded by thanking the Provincial team for their support and the brethren of the lodge for their work. He congratulated the junior brethren on their delivery of the respective working tools and Kevin for his toast and everyone for making him so welcome to the Warrington Group. He commented on the enjoyable evening he had had and how good it was to see a father install his son. He also commented that membership numbers were on the increase in the Province. He wished everyone should have a good year.

The master’s song was sung by Norman Pritchard who was accompanied by Brian Wilson (acting organist).

At the close of the evening Robert presented Tony, Kevin and Andy Barton with bottles of champagne, thanking them for their attendance. Tony, Kevin and Andy thanked the brethren saying they were delighted to receive such gifts and felt sure their wives would be similarly pleased.

This most enjoyable and memorable evening was brought to a close by Nicholas Woodward proposing the Tyler’s toast.