With the realisation of the pending 100-year anniversary of the cessation of the terrible ‘War to end all Wars’, the Warrington Group of Masonic Lodges and Chapters in conjunction with the Warrington Museum of Freemasonry, both felt that some form of special commemorative event should be organised to mark this special date.

After some considerable debate it was agreed that an evening of remembrance and celebration should be organised and a team was put together to explore possibilities and various options.

Several guidelines were agreed which included: a celebratory meal, which should reflect the times of WW1, the event should be open to both Masons and non-Masons alike and it should be a vehicle to generate some funds for a worthy cause, preferably with connections to the armed forces.

Caroline Crooke had already undertaken some research into the lives and times of Masons from the Warrington area who served and died in WW1, which was a good basis for information.

A menu was put together and the programme for the event was formulated which included entertainment resulting in a truly memorable night at the Warrington Masonic Hall, at which almost 80 people attended.

The evening started with an introduction from Les Savage, the master of ceremonies, who then introduced Andy Barton, the Warrington Group Chairman. Andy welcomed everyone saying he was very pleased to see so many people supporting this very important event, wishing all a most enjoyable evening and then handed control back to Les.

Following on from grace which was delivered by Derek Bird (acting chaplain), an excellent five course meal was served which consisted of; mulligatawny soup, prawn and avocado cocktail, Gressingham duck with plum sauce, dauphinoise potatoes and roasted vegetables, victory trifle, which was followed by fruit cake and Lancashire cheese. Tea or coffee finished the meal and Derek then returned thanks. Les proposed a toast to, ‘The Queen, Duke of Lancashire’.

Andy then proposed a toast to the ‘Soldiers, Sailors and Airmen’s Families Association’ (SSAFA). Major General Keith Skempton responded thanking Andy for his toast and provided a short background to SSAFA and again thanked Andy for the organisation of the event, saying how delighted he was to be present and to represent SSAFA.

Les handed over control of the entertainment to Brian Wilson, the musical director. Brian explained the entertainment for the evening and being mindful of the theme, he had put together a programme combining music and literature of interest, with high relevance to the remembrance of the WW1 and other conflicts since. 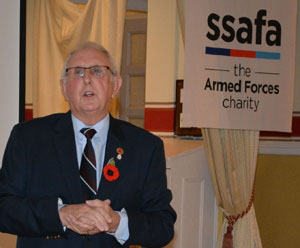 Several poignant readings were delivered by members from the Warrington Group and Museum, but none more than a poem both written and presented by Emily Garratt, which was supplemented by projected images. Emily is a young student and the poem was very well received by all present, some saying how knowledgeable she was, how excellent the presentation was, how well she had written the poem and how appropriate it was.

Community singing followed with Brian taking the lead and songs including ‘Roses of Picardy’, ‘Keep the home fires burning’, ‘Keep right on to the end of the road’, ‘It’s a long way to Tipperary’ and ‘Pack up your troubles’ were sung. Everyone seemed to know the words even though song sheets were available. The entertainment was brought to a close by Bet Davies singing a beautiful solo accompanied by Brian.

An auction was held for a rare bottle of whisky which raised a magnificent sum of £110, other raffles were also available for many and varied prizes.

Vic Charlesworth (museum curator) brought the proceedings to a close by thanking everyone for their generosity and announced that the event had raised in the order of £1,500 for SSAFA. Martin Duguid, a representative of SSAFA thanked all present for the excellent event both in food and entertainment terms, saying he was both delighted and grateful for the magnificent donation which would be put to great use. 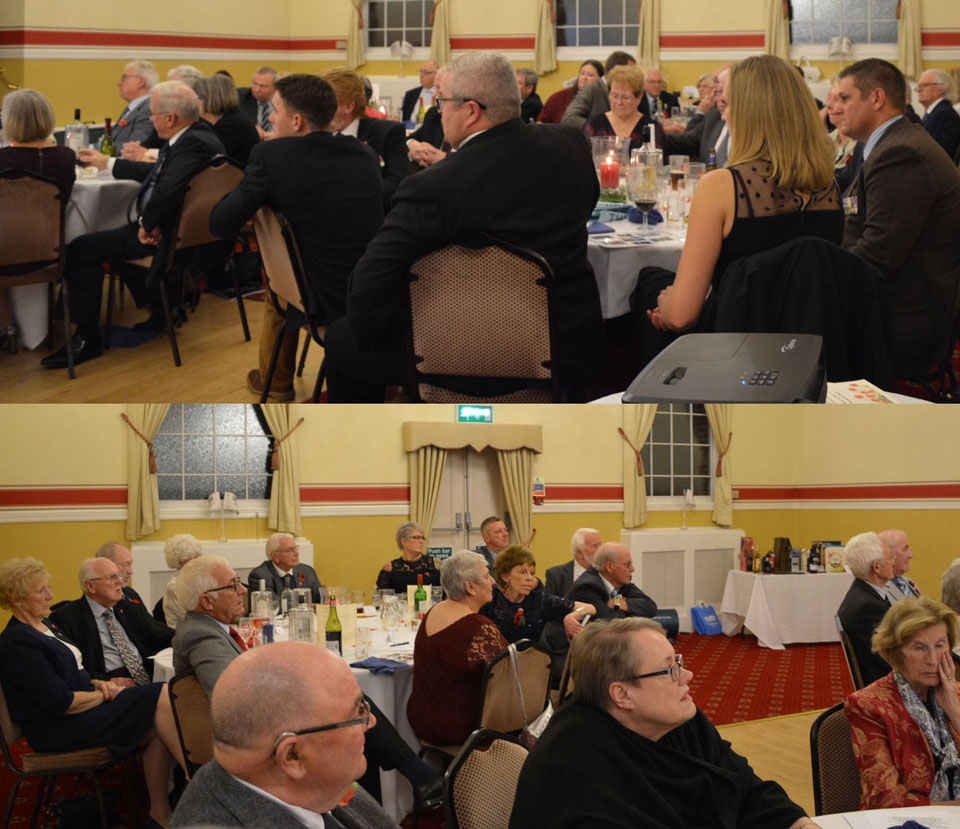