The weather was a mixture of showers interlaced with lovely sunshine. The Remembrance Day could quite easily have been at the opposing season with its slight rain showers, sunshine and light winds, but generally not as cold as you may expect for mid-November. 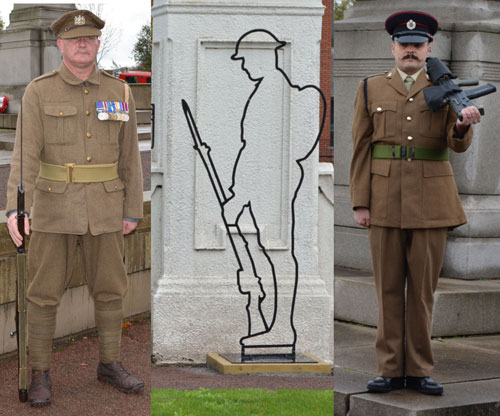 However, the true autumn colours prevailed with the reds and browns of the autumn leaves almost in stark contrast with the 100s of bright red poppies being worn by a staggering number of attendees all on their way to the Warrington War Memorial, where record crowds surrounded the Cenotaph and spilled onto the pavements and roads closing Bridge Foot completely.

By 11, all had settled, ‘The Last Post’ sounded and the Standards were dipped. Lt Col Les Taylor-Duff TD delivered the famous lines from Robert Laurence Binyon’s poem: ‘For the Fallen’ and the crowd responded in unison: ‘We will remember them.’ The two minute’s silence was impeccably observed, not even a baby cried.

Reveille marked the end and Lt Col Les Taylor-Duff TD gave the poignant ‘Kohima Epitaph’. Wreaths were laid as ‘O valiant hearts who to your glory came’ (by John S Arkwright) was sung by the assembled.

A cadet read the entirety of Robert Laurence Binyon’s poem: ‘For the Fallen’ and the service was concluded by the Rev Canon Paul Wilson. The National Anthem was then sung.