The 185th regular meeting of Travellers Chapter No 4679 was organised as a joint convocation of Warrington Group of Chapters at the Warrington Masonic Hall. In attendance were Chapter of Elias Ashmole No 148, Gilbert Greenall Chapter No 1250 and Old Masonians West Lancashire Chapter No 7702.

The chapter was smoothly opened by the three principals, Andy Sharp, Paul Rigby and John McConnell (standing in for John Tyrer). After concluding the usual administration, Paul was admitted with the other dignitaries in true ceremonial style. Andy Sharp welcomed Paul and all the visiting companions to the convocation and offered him the sceptre, which he accepted but returned, thanking him, but being glad to hand this responsibility back to him.

The main business of the evening was for the four Warrington chapters to deliver a presentation entitled ‘The Platonic Solids’. This delved deeply into the first mentions of platonic solids within Royal Arch Freemasonry and the connections between that and the symbols of our chapters.

The script for the presentation was given by members of all the four chapters, each delivering specific parts of the whole. The focus of the research was to examine the solids, their history with regards to Royal Arch Masonry and the links (sometimes obscure) between that and our rituals, symbols and ceremonies.

The presentation was lauded and proved to be very interesting. It really offered more than enough information for everyone to make a true daily advancement in Masonic knowledge. 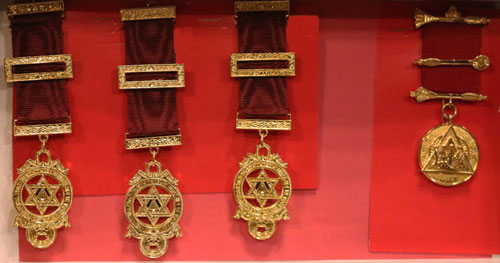 A magnificent set of engraved past principals’ jewels and a principal’s jewel presented to Travellers Chapter by Charles Carr.

During the convocation in any other business, Charles Carr made a presentation to Travellers Chapter of engraved past principal’s jewels and a principal’s jewel in memory of the late Ken Boswell, who died in 2017 aged 90 years. Ken had been an active member of the chapter for over 32 yrs. There was also an engraved set of principles jewels in memory of his son Ian Boswell who had been Assistant Provincial Grand Master for West Lancashire, Past Warrington Group Chairman and an active member of Travellers Chapter. Ian was called to a greater convocation in 2014. Both companions are sadly missed by all members in the Warrington Group and beyond.

Over £80 was raised as alms in lodge and £140 at the festive board, an impressive figure for this convocation.
After the festive board, Andy Barton thanked the principal guests and the 16 participants for their efforts during the evening.

Paul, in his speech, remarked on the links between Craft and chapter highlighted by the evening’s talk and added his own observations about how the representation of the Ark of the Covenant, which used to be represented on the floor of the chapter, linked to its representation in Craft Masonry, particularly on the second degree tracing board. He encouraged companions to engage with brethren not yet committed to the Royal Arch and finished by congratulating the whole assembly for the work done that evening.

A good evening and a very ‘solid’ convocation.

Pictures and story by Eric Miller.

The presenters of the ‘Platonic Solids’, in relaxed mode after the hard work.