Shock of the blue!

As is customary in their lodge, Stuart Ainsworth WM and the brethren of Lodge of Charity No 2651 assembled on the first Thursday of the month of November to conduct their business. The lodge was opened and the preliminaries dealt with before the main item of the evening, a lecture by the Warrington Museum of Freemasonry Curator Vic Charlesworth. Vic is also a member of Lodge of Charity. The topic for consideration entitled ‘Charity at War’. 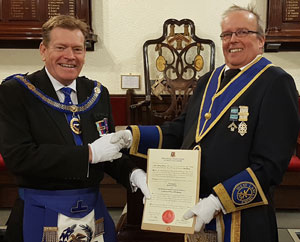 Looking forward to the presentation, the brethren made themselves comfortable, but before the lecture began, a report was heard at the door to the temple. Disbelief spread throughout the room as the inner guard announced that Kevin Poynton, Assistant Provincial Grand Master, stood without and demanded admission. No stranger to lodges in the Warrington Group, Kevin’s arrival caused much consternation amongst the gathered brethren.

The WM admitted Kevin, welcomed him and offered him the gavel of the lodge. To everyone’s surprise, he accepted and retained the gavel and took the master’s chair.

Kevin then explained that the duties of an Assistant Provincial Grand Master were many and varied, sometimes enjoyable other times less so. He continued that his visit was most definitely of the enjoyable type, and he asked that the director of ceremonies Derek Bird, present Quentin Newhall, the immediate past master, before him.

This done, Kevin addressed Quentin, thanking him for his unstinting commitment during his year of office despite the challenging and complex health issues he had endured and continues to endure. Kevin stated that Quentin’s determination to fulfil all his duties, including visiting other lodges, had earned him the admiration of everyone in the Warrington Group. He then announced that the purpose of his visit was to inform Quentin that Tony Harrison the Provincial Grand Master had decided to honour him with the rank of Past Provincial Assistant Grand Sword Bearer. Kevin then invested a bewildered Quentin with the collar of that rank and asked Andy Barton, Warrington Group Chairman, to read the Patent of Appointment. 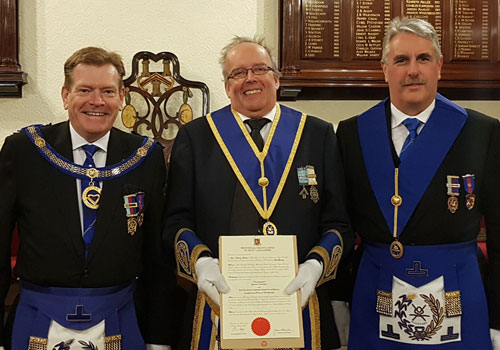 Pictured from left to right, are: Kevin Poynton, Quentin Newhall and Andy Barton.

Lodge members and visitors then saluted Quentin appropriately to his provincial rank and applauded his appointment. Kevin then restored the WM to his rightful place in the lodge as the surreal events gradually began to return to normality.

Once the excitement and delight of the appointment died down, Vic Charlesworth was called upon to deliver his illustrated lecture which focussed on a brief resume of the events leading up to World War One and then a description of the experiences of members of the Lodge of Charity and of the Warrington Group, who had fought during that war.

The lecture was very well received and members added their recollections of accounts passed on to them by family members and relations who had suffered similar experiences during WW1.

The WM thanked Vic for an excellent lecture and all then retired to the social board to offer their personal thanks to him and to extend their heartfelt congratulations to the lodge’s newest Provincial Officer.

Story by Chris Gleave and pictures by Andy Barton.