Almost 40 members and guests attended Warrington Masonic Hall to witness Kevin Hickman being installed into the chair of King Solomon in the Warrington Temple Lodge No 6420. This was the third time for Kevin to be installed as WM in this lodge. 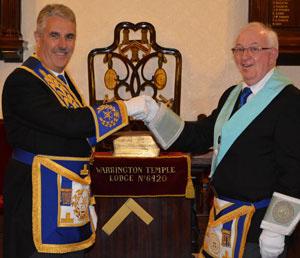 Peter Barton, acting WM, welcomed members and guests with his good wishes and hoped everyone would have an enjoyable evening. Peter opened the lodge and conducted the normal administration and formalities.

Peter asked Andy (as WM) if he would like to occupy his rightful place in the lodge, which Andy accepted and occupied the chair. Andy requested John McIntyre to continue to act as SW, Charles Carr to continue as JW and Barry Corcoran to continue as IG. They all accepted stating it would be an honour and privilege.

Kevin was presented to Andy to receive at his hand the benefit of installation by Robert (Bob) Armstrong and Alan Greggs. Kevin was then installed into the chair of King Solomon according to ancient custom.

Derek Hazelhurst, director of ceremonies, proclaimed Kevin as WM until the next regular period of election. This being Kevin’s third time as WM, the ceremony was somewhat shorter than usual, but just as enjoyable, being a relaxed atmosphere but with all due reverence, humility and sincerity. 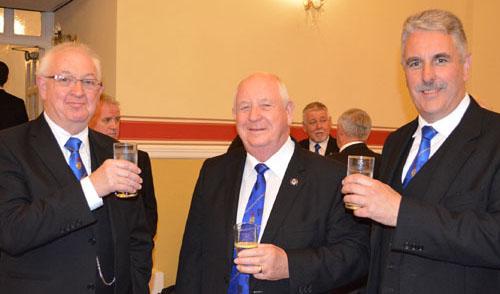 Immediately following the installation, Harry, on behalf of the Provincial Grand Master, congratulated Kevin on being installed again into the chair of such a friendly lodge, commenting that the ceremony was faultless and a pleasure to witness. He also praised Andy as installing master and Derek for the smooth running of the ceremony and the members and visitors of lodge for their work.

Harry extended his good wishes to all present and hoped Kevin and all his officers would have a productive year and wished everyone the best of health to enjoy it to the full. 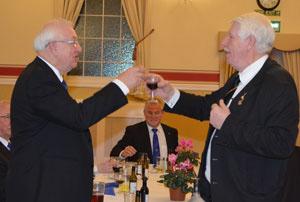 Kevin (left) being toasted by Norman Pritchard during the master’s song.

At this juncture Kevin conducted his first duty as WM, which was to present the charity donations to Harry. The donations were to The Warrington Masonic Hall £100, West Lancashire Freemasons’ Charity £100, Ecclesholme £100, Guide Dogs Association £100, Walton Lea Partnership £100 and the Children’s Adventure Trust £100, totalling £600. 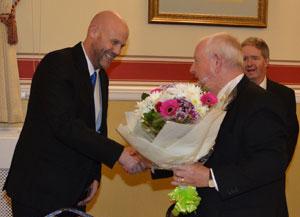 Harry received the donations saying how pleased he was to receive such magnificent sums of money, particularly from such a small lodge. He praised all concerned saying it was such a remarkable amount and thanked the lodge and brethren on behalf of the recipients, stating that the donations would be gratefully applied.

The catering staff supplied an excellent five course meal which was enjoyed by all present. The master’s song was sung by Norman Pritchard accompanied by Ray Illingworth.

On behalf of the brethren, Andrew Pickles presented a bouquet of flowers to Harry, which he received with thanks saying his wife would enjoy them greatly particularly because they had just celebrated their wedding anniversary.

He once again extended the good wishes of the Provincial Grand Master and closed by saying that the lodge was in good hands, referring to the way the lodge had responded by ‘all hands-on deck’ to undertake a very smooth and excellent ceremony. Harry thanked everyone present for making the evening so enjoyable.