This year the annual autumn social of the Lodge of Lights No 148 took on a different theme from the usual introduction to the new Masonic season, to that of a Halloween party in advance of the end of October. 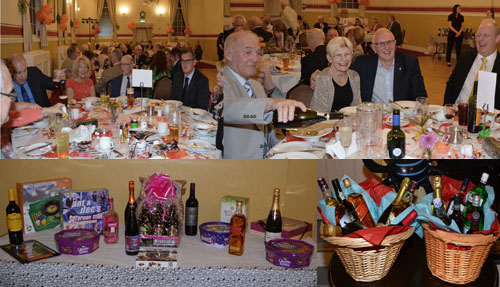 The social was again held at Warrington Masonic Hall and the event was planned as usual by the ladies and social committee led by Dave Tabron as social secretary.

David Harrison (WM) opened the evening by extending a warm welcome to everyone and hoped that an enjoyable evening would follow. Grace was offered by Cannon Michael Finlay (acting chaplain).

Cannon Michael Finlay returned thanks. The entertainment followed with dancing to ‘The White Ties’ who played an excellent mix of music to suit everyone’s taste including a wide selection of popular music.

The first raffle included with the ticket had many quality prizes. This was followed by the always popular bumper basket of alcoholic beverages which was the main fund raiser of the night. The main prize was won by Shaun Hayes.

The event was very successful and enjoyed by all with dancing continuing until late. The evening raised a magnificent sum of £500 for charity.

Pictured left: Shaun Hayes the winner of the main prize of alcoholic drinks. Pictured right: Dancing the night away to the sounds of ‘The White Ties’.