Brian in for Ashmole

Ashmole Lodge No 5128 welcomed members and guests from East and West Lancashire Provinces at Warrington Masonic Hall to see Brian Wilson installed into the chair of King Solomon. Brian has been WM in East Lancashire previously, but never in his present lodge. Between the current WM, Nick Delaney, and a long succession of junior brethren waiting to ascend to the throne, was this one year where Brian could become WM of his lodge, an opportunity he has grasped with enthusiasm.

Nick opened the lodge in his usual professional manner and then took time to express personal thanks to the lodge brethren for their help and support during his year in office. He and the assembled brethren welcomed their principal guest for the evening, PrJGW Barry Dickinson, acting as representative of the Provincial Grand Master Tony Harrison, who was admitted with all due ceremony. In his company were grand officers Dennis Rudd, Chris Eyres, Stan Churm, Tony Bone, Brian Durkin and Andy Barton (Warrington Group Chairman) with acting Provincial grand officers Stephen Clarke and Geoff Whittle.

The ceremony proceeded smoothly and easily. Nick requested Charles Carr to act as SW, Tony Bone to act as JW and Norman Pritchard to act as IG; all accepted with pleasure. The working tools of the third degree were explained by Peter Lau (a stalwart last-minute stand-in), the second degree by Mark Keig, and the first degree by Sabar Hussein, all of whom are junior brethren. Their performance was lauded.

Following the installation ceremony, Barry, on behalf of the Provincial Grand Master, congratulated Brian on being installed into the chair. He made special mention of Nick’s superb performance in the installation, which he emphasised by shaking the hand of the installing master, and congratulated all of the brethren involved on the quality of their works.

Brian presented charitable donations to Barry for: £250 to the West Lancashire Freemasons’ Charity; £250 to MCF; £250 to the Warrington Masonic Hall, £250 to Dementia Research; £125 to Room at the Inn and £125 to Ella Together. A grand total of £1,250. Barry received the cheques with gratitude and thanked the lodge for their generosity. In addition to this praiseworthy giving, over £120 was raised as alms in lodge. 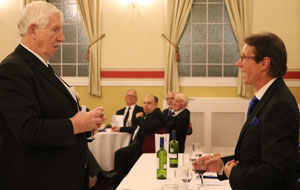 Norman in full voice to Brian during the master’s song.

After the festive board, Barry brought personal greetings from the Provincial Grand Master. He congratulated the lodge for the warmth of its welcome and made special mention of Nick’s superb performance; he commended DC Mike Moore and incoming DC Derek Houghton for their organisation in lodge; he made special mention of the deliverers of the working tools and thanked Stephen Derringer for his wonderful skill at the keyboard.

The contingent of brethren from Bryn Masonic Hall, supporting Barry, were given special praise. Barry passed on an appeal from the Provincial Grand Master that more Craft masons should join the Royal Arch, to spread the word about membership of Masonry, provide for our Masonic halls and support the MCF Festival.

The master’s song was sung by the inimitable Norman Pritchard who was very ably accompanied by Stephen Derringer.

At the close of the evening, Brian presented Barry and Andy with bouquets of flowers (for their wives) and thanked them for their attendance. Barry and Andy returned thanks to the brethren saying they were delighted to receive such gifts and felt sure their wives would be similarly pleased.

Pictures and story by Eric Miller.