Members of Birchwood Lodge No 8861 and guests met at Warrington Masonic Hall to celebrate 65 years in Freemasonry of Jim Brian Allardice. Jim Brian, I hear you ask? Well, thereby hangs a tale. Opinion among all who know the celebrant is split evenly between Jim and Brian; even more confusing as he will answer to either name (especially at the bar). On the authority of the director of ceremonies, this story starts all the way back in the 1930s when a very young Jim (junior) started to be called Brian by his mother to differentiate him from Jim (senior), his father. So, Jim Brian grew up with two first names. We must pick a side, so for this occasion, let’s call him Jim. 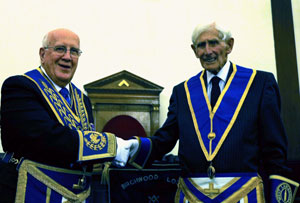 WM Mathew Crawley opened the lodge in efficient style, and then offered the gavel to Dennis Rudd (an honorary member of this lodge) for the ceremony. As 65 years in Masonry is not an official milestone, there was no official representation, but the lodge had plenty of grand presence with honorary members Gordon Amos, Kevin Poynton, Dennis Rudd and acting PrAGDC Stephen Clarke. Dennis asked for the tyler to be admitted for the occasion.

Jim was seated comfortably before the master’s chair and Dennis gave his story. He was born in Warrington, in early 1930 and first attended Bewsey Infant School. When the family moved to North Wales, he attended Prestatyn Primary then Rhyl High School. The family returned to Warrington and Jim completed his education at Botelar Grammar School. He excelled at badminton, attaining a very high standard and continuing his involvement later as Chairman of the Warrington Badminton League.

After school, Jim entered into accountancy training then worked for Tunstall and Company, Chartered Accountants, in Warrington. National Service took him away to the Royal Air Force Officer training, first at RAF Jurby and then the Isle of Man in 1953, but he gained leave at the end of that year to marry his wife Dorothy, on Boxing Day. This means they have been married for 64 years, a major achievement in itself. They have three daughters and nine grandchildren. 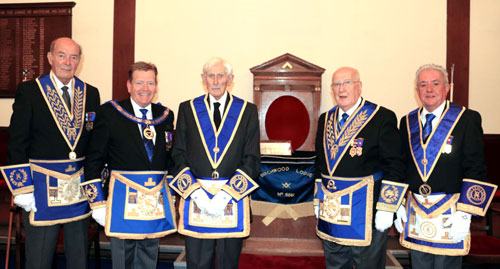 Jim’s Masonic pedigree is impeccable, with his father joining Warrington’s True Light Lodge No 7323, serving as chaplain until 1970. Following his father’s death, Jim gave Dennis the Royal Arch Jewel presented to his father on his exaltation in 1933! His father-in-law, Frank Povey, was a member of Liverpool Dramatic Lodge No 1609; and so with such connections, it is little surprise that Jim was initiated into Freemasonry in Warrington Lodge No 6987 in 1953. Progressing regularly through the ranks, Jim attained the chair of King Solomon in 1963. He served this lodge afterwards in the roles of auditor and treasurer until it had to follow the way of many lodges of that time and amalgamate – in this case with Good Companions Lodge and Winmarleigh Lodge in 2006, to become Optima Lodge No 6101. Sadly, this lodge surrendered its warrant a few years later, so Jim joined Birchwood Lodge in 2014. Provincial honours obviously came to such a long and dedicated Masonic career, with the rank of PPrAGDC in 1979, PPrSGD in 1990 and PPrJGW in 2001. Jim has also been rewarded with ceremonies and certificates for his golden and diamond jubilees. 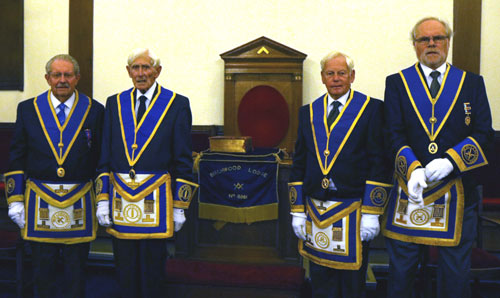 After the simple, but excellent festive board, Jim’s health was toasted by his good friends Alan Gillard, Norman Illingworth and Geoff Pearce. He responded in good style, thanking those who’d helped arrange the evening, Dennis; his three friends Alan, Norman, and Geoff (or his carers, as he jokingly refers to them) and his proposer into the lodge, Phil Mitchell.

With no official certificate to present to Jim in commemoration, the lodge asked him what would be a suitable present. Having seen the lapel pins worn by many members, Jim thought that something similar would be appropriate, so a special pin was produced and presented. Although this was not his night and therefore lacking the official presentation, a similar pin was given to Dennis to commemorate 55 years in Masonry.