The residents and staff of the Tithebarn Masonic Care Home have had a busy summer, as the activities reported below show. Ken O’ Hare has kindly put together a collection of photos taken at the various events together with a few words to fill in the details.

It’s been so cool at Tithebarn, as during the recent heatwave, Activities Coordinator Mary Piert came up with a novel way for the residents keep cool; she bought paddling pools for the residents to sit around and bathe their feet in the cold water and then served up some refreshing gin and tonics!

There was also another great afternoon at the Tithebarn ‘Meat Feast’, a popular event that is held each summer in the grounds of Tithebarn.  Guests were offered the customary welcome drink before sitting down for the meal.  John Stallard, Chairman of The Friends of Tithebarn, opened the proceedings with a welcoming speech before the food was served.

Guests were offered a delicious range of meats – beef, pork, chicken, lamb, burgers, and sausages cooked and prepared by Graham Chambers, all accompanied with a choice of salad dishes.  After the main course guests could choose from a range of desserts, followed by cheese and biscuits and ending the meal with tea or coffee.

Raffle tickets were sold with the profits from the raffle going to the Friends. Before the raffle draw, a cheque for £3,000 was presented to John Stallard from the lodges and chapters of the Ormskirk and Bootle Group. Throughout the afternoon guests and residents were entertained by the ‘Whisky Wooders’. 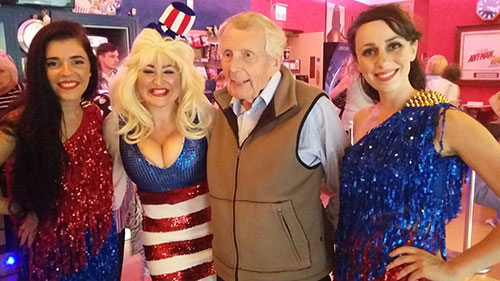 Jo Griffin, pictured with entertainers at the Crosby Plaza.

Keeping up the flow of activities, residents were recently driven to the Plaza Cinema, Crosby. The cinema puts on variety shows throughout the year, raising monies for charities. At this show, throughout the afternoon the audience were entertained by many artists. The performance concluded with the audience happily dancing a ‘conga’ around the cinema! One attendee, Don Welsh said: “It was a tremendous afternoon and great entertainment.” Plans are already being made for residents to attend the next variety show at the Plaza.

Finally, it was recently Tithebarn’s turn to host the annual quiz competition held between Llandudno and Tithebarn residents. The Llandudno team residents arrived at Tithebarn as cup holders having beaten their opponents when they travelled to North Wales last year. This year it was the residents of Tithebarn who were triumphant, and they are now proud holders of the cup for next 12 months. 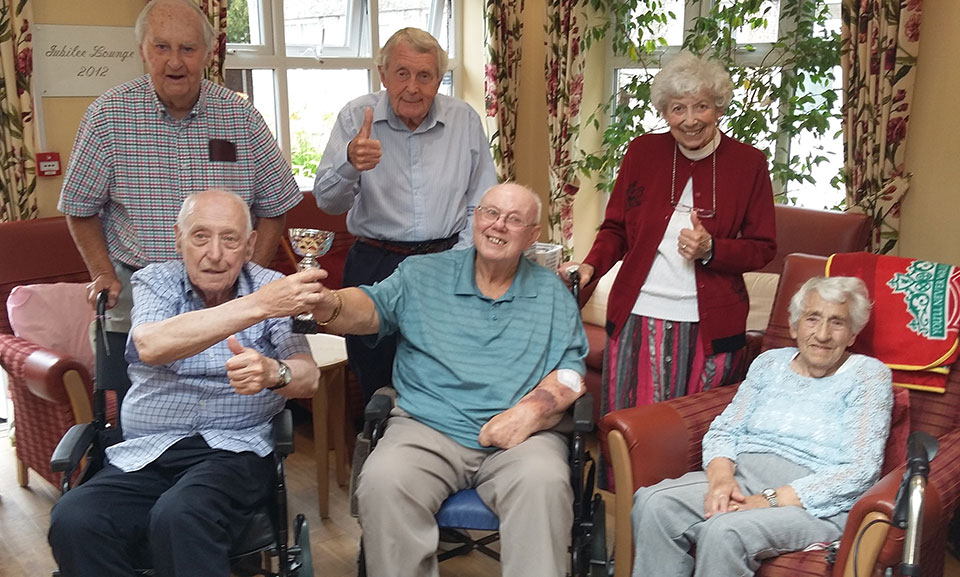