The Mayor pays a visit

Warrington Masonic Hall welcomed its Mayor, Councillor Karen Mundry. The visit was arranged to allow for a pleasant duty of West Lancashire Assistant Provincial Grand Master Kevin Poynton and Andy Barton (Chairman of the Warrington Group) to present her with a cheque for £200 towards the Mayor’s charities. 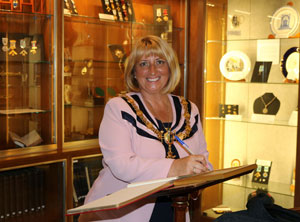 The Mayor signing the guest book

The money was raised, most generously, at the St George’s evening celebration, which the Mayor attended with her husband, Councillor Hans Mundry.

It would have been amiss not to take the opportunity to show off Winmarleigh House – Warrington’s Masonic Hall and a pride of the Province. The Mayor has already seen the classic brick frontage and columns, as it lies within sight of Warrington Town Hall. She was now welcomed inside to the comfort of tea and biscuits in one of the lounge areas, then taken on a tour, starting with the Masonic Museum. Here she signed the guest book and had various Masonic items explained, most notably being given a layman’s guide to the historic tracing boards by Kevin and Andy.

From the busy, well-stocked museum, she was taken to the expanse of the large lodge room, and seemed impressed by the spacious layout which, to non-Masons, must seem imposing. The cheque was officially handed over in front of the master’s chair, and the Mayor eagerly took the opportunity to sit in that chair and look out – a view that has delighted (and sometimes terrified) masters for many years.

The Mayor parted with good will, best wishes and the hope of many more visits to us.