Alan Murray was installed into the chair of King Solomon in the Black Sea Anchor Lodge No 57, Balchik, Bulgaria. Alan Murray at his installation.

For a Saturday meeting, 50 Freemasons from lodges across Bulgaria (Sofia, Burgass, Dobrich) and the United Kingdom attended the installation meeting of Alan Murray held at Lotus Hotel Masonic Temple on the seafront of Balchik, a quiet resort on the Black Sea. The lodge, which is one of only two English speaking lodges under the Bulgarian Constitution, comprises of an equal number of Bulgarian and English born members.  Alan, who is a member of Newton Lodge No 6288 (West Lancashire), was senior warden before him and his Bulgarian wife Vasi, relocated for family reasons in February 2015.

All visitors and members with the exception of the officers of the lodge were seated before the procession began, pride of place being given to visiting grand officers, Gordon Amos, Chris Eyres and Anthony Wright, along with David Whitmore and Alan Greggs, all of whom had travelled from England to enjoy the proceedings.

The lodge was opened in due form by the installing master Don Owen, and after the minutes of the previous meeting were accepted respect was given to the departed merit of George Fors, a past master and founding member, who had recently and suddenly passed to the Grand Lodge above.

The installing master then invited all members of the lodge to line up in the north and he walked amongst them and thanked each one personally for the help and support he had been given during what had been a difficult year for him and his family.

An entered apprentice retired and the lodge was opened in the second degree. Ivan Jordanov was invited to take the seat as installing senior warden; Anthony Wright (current WM of Prae Wood Lodge No 8919, St Albans, Hertfordshire) as junior warden and German Germanov of Yaila Lodge No 16 acted as inner guard.

The master elect took his obligation as regards to his duties as master of the lodge. All fellow craft then retired and after the lodge had been opened in the third degree all master Masons retired and a board of installed masters was opened. Lubumir Parmakov, Past Deputy Grand Master of Bulgaria and the acting director of ceremonies, presented Alan Murray to the installing master and he was duly installed in the chair of King Solomon with due respect and reverence. 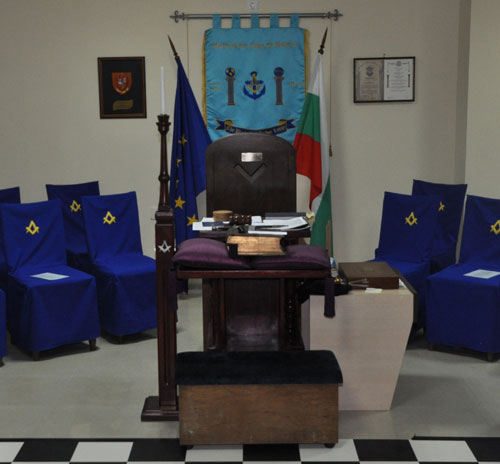 After the ceremony the brethren were transported the short distance along the coast to the Regina Maria Hotel where the celebratory festive board meal took place. A traditional Bulgarian feast was on the menu starting with shopska salad, (tomatoes, cucumber, pepper, onion, olives and goat’s cheese); accompanied by the Bulgarian traditional drink of rakia, which on this occasion was made from grapes. The main course was pork fillet with a trio of mushrooms and chicken roulade accompanied with sauté potatoes and a selection of grilled vegetables followed by a dessert of homemade carrot cake or blueberry cheesecake. This was all washed down with bottled water, a selection of soft drinks and red, rose or white wine.

The master’s song was sung by Anthony Michael Wright, son of the aforementioned PrGChap of Hertfordshire and the response on behalf of the visitors was given by Gordon Amos who emphasised how special was the Black Sea Anchor Lodge for its diversity of members and their friendliness. He particularly stressed how special it was to be in the presence of such a committed and distinguished Freemason as the Past Deputy Grand Master of Bulgaria, Lubumir Parmakov.

The collection in the lodge and evening celebratory raffle raised 929 lev (around £422) and will be added to the lodge’s charity fund to continue to refurbish the children’s wards at Balchik Hospital during 2018.

During the installation festive board, all the brethren’s ladies met in the Regina Maria restaurant looking over the Black Sea, ready to continue the evening’s celebrations. One of the visiting brethren from Sofia Lodge Zahari Stoyanov No 107, Vasil Penchev, presented a bottle of 1959 rakia to the IPM Don Owen during the third rising of the installation. Rather than keep this for himself, he auctioned off a glass of this rare vintage for five lev per glass. This auction raised a further 100 Lev, which was added to the charity fund.

All the brethren from the Black Sea Anchor Lodge, their ladies and visiting brethren had an excellent day and evening.

Story by Chris Eyres and pictures by David Whitmore.