70 members and guests, many resplendent in red outfits or accessories, assembled at Warrington Masonic Hall to celebrate St George’s day. The banquet hall decorated with St George’s flags and buntings, with the red and white colours replicated onto the tables with red roses, candles, napkins and white tablecloths. 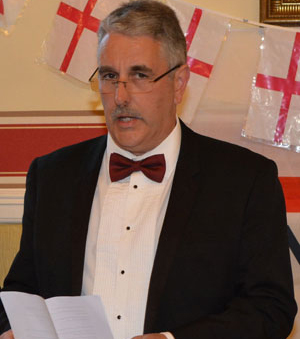 Alan Greggs introduced himself as organiser for the evening and started with a ‘heads and tails bingo’ game as the first fund raising item of the evening. This had everyone standing up and placing their hands on their heads or their tails, which provided some gentle exercise before the meal was served and this improved everyone’s appetite.

On completion of the bingo, Alan introduced Charles Carr as director of ceremonies for the evening and handed over control to Charles, who then introduced Warrington Group Chairman Andy Barton to officially open the evening.

Andy welcomed all the members and visitors, especially the principal guests, the Deputy Mayor Cllr Karen Mundry and Consort, Cllr Hans Mundry of Warrington. Andy informed those present that the evening’s proceeds would go to support the Mayor’s charities. He concluded by saying that he hoped that everyone would have a most enjoyable evening.

Peter Hill, vocalist and DJ, led the singing with ‘Rule Britannia’, ‘Jerusalem’, ‘Land of Hope and Glory’ and ‘We’ll Meet Again’ which bought lots of nostalgia and patriotism to the forefront, demonstrated with much flag waving by all those present. After a short break, just long enough for a visit to the bar, the raffle was drawn with several lucky winners collecting a prize.

Andy announced that the proceeds from the evening were over £360 which would be donated to the Mayor’s chosen charities.

The remainder of the evening was taken up by dancing to Peter Hill, a disc jockey and vocalist.

Andy Barton closed the evening by thanking everyone for their attendance and generous support, he concluded by wishing them a safe journey home.

Dancing the night away to Peter Hill (far right).